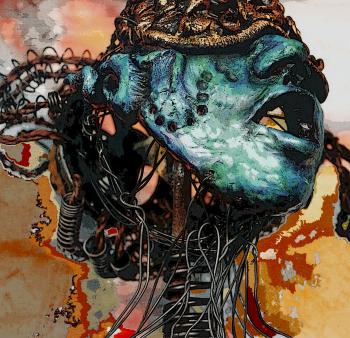 
Vicky Lentz, Edmundston, Canada: The Medusa of P'tit Sault.  What would our human world be like without the power of our imagination?  It is truly a gift to believe in a world beyond our own self-imposed, physical reality.  Imagine if you will a place that knows no boundaries where the impossible becomes the possible and where the power of creation knows no limits.  From the concrete world that is created by our minds with its boundaries and parameters is it possible to experience something much greater?  Parallel fantastic worlds in another time and place!  I believe so!  Instead of asking yourself why, ask yourself why not!  Where did she come from - The Medusa?  From another world, unlike our own, in a parallel universe she was born and lived many million of what we know as our earth years.  It was from a time before time, from a place, before place, from a universe thriving with transformative life forms.  The power of mutation was theirs to become that which they inhabited - one with their environment.  Life forms did not exist independently but all life shared forms, transforming at will.  Knowing the orther like themselves - not distinguishing separateness from one another.  She was a powerful being of beauty.  Her female form morphed into the land.  Her magic was felt by all forms she shared and inhabited.

The Medusa knew of worlds beyond her own.  She sensed the thin veils that separated her universe from the others.  She was curious about a universe she could see formed around a sun not unlike the sun on which she lived and drew her life force.  She was drawn to the blue-green planet within this other solar system.  She could see a life force pulsing around its circumference.  It as a vibrational field unlike her own.  She was compelled to explore this new and curious place.  And that is how it come to be.  She slipped quietly through the veil into our solar system and made her way towards the blue-green planet.  She left behing all that she was but carried with her to this strange new place her transformative powers of unimaginable earthly proportions.  She moved outside the speed of time and entered the atmosphere of earth.  Her keen senses were overcome by the newness of this place.  The Medusa morphed into the mountains, oceans, skies, forests and creatures that inhabited this planet.  She became one with planet earth and was alive in a fresh and delightfully new way.  The earth beings welcomed this new arrival.  The mountains stretched out into the sky with newfound strength, the oceans swelled and the tides ebbed in her vibration.  The skies clouds danced and the wind currents formed energy patterns around the planet that remain to this day.  The forests and her creatures spread across the land and she gave them the gift of transformation.

The metamorphosis that exists today was a gift from the Medusa.  What we call evolution is her power of transformation that she shares.  She is the earth and the earth is her.  If you believe and can quiet the business of your mind you can feel her presence.  She walks with us in the forest.  She looks out from the peaks of the mountain tops on all of creation and she swims in the depths of the oceans.  SSSSHHHHH she is here, her life energy is our very own.  Can you feel her?